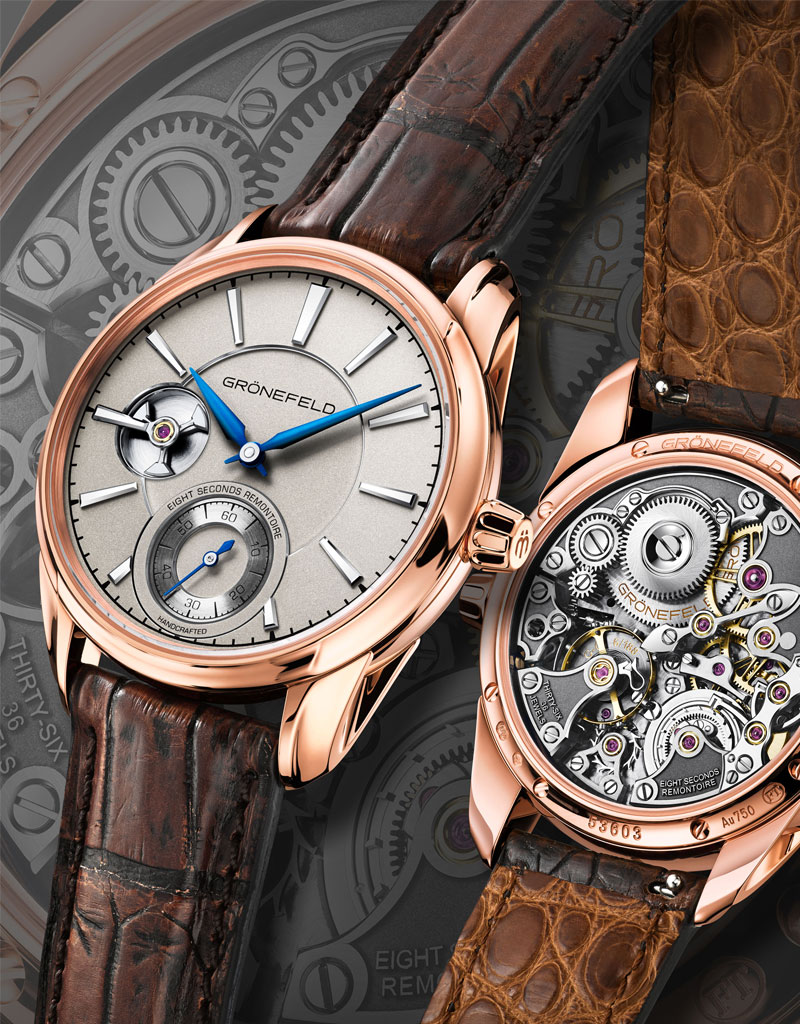 The inspiration for the Grönefeld 1941 Remontoire

Ever since Bart and Tim were young boys they would frequently play to the sounds of the Saint Plechelmus church clock movement, close to the location of the company's workshops. This movement has always played an important part in the history of Grönefeld.

Johan Grönefeld, the brother's grandfather, was responsible for maintaining the church clock. When Johan passed away, this responsibility passed to their father, Sjef.

The church clock, created in 1913 by Royal Eijsbouts in the village of Asten, The Netherlands is equipped with a remontoire mechanism. The rationale for the remontoire being used in the church clock was the clock's display was positioned much higher than the movement, necessitating significant force. However, the magnitude of such force would prove too great for a conventional escapement, hence a remontoire, or constant force mechanism, was fitted. Moreover, the minute hand was calibrated to jump every 30 seconds, breaking any ice which may have formed in cold weather and, in so doing, preventing the clock hands from freezing.

The new 1941 case, recognising the influence of Sjef

To coincide with the release of the Grönefeld 1941 Remontoire, Bart and Tim are pleased to reveal for the first time, the new 1941 case. This case design, named after the year their father was born, harnesses much craftsmanship and is intended to recognise the positive influence Sjef has had on their lives.

The sculpted case is executed with a specially shaped cutter to create its characteristic hollowed, concave recesses and convex surfaces. In between each additional cutting phase, the case is polished prior to the next stage of milling, ensuring the precisely defined contours of the case are retained. This process proves incredibly time-consuming but the outcome justifies the effort.

The lugs are retained with two hidden titanium screws, positioned inside the case. The lugs can be detached for remedial polishing or, should they have been subject to excessive trauma, they can be replaced.

For the first time, Grönefeld offers the new 1941 case in 18-carat white gold, alloyed with Palladium 150. This form of gold alloy is costlier but obviates the need for rhodium plating, hence its surface will not wear out. Alternatively, a 5N red gold case option is available.

Measuring 39.5mm in diameter, with a restrained height of 10.5mm, the 1941 case is the epitome of elegance, courtesy of its discreet, graceful lines. 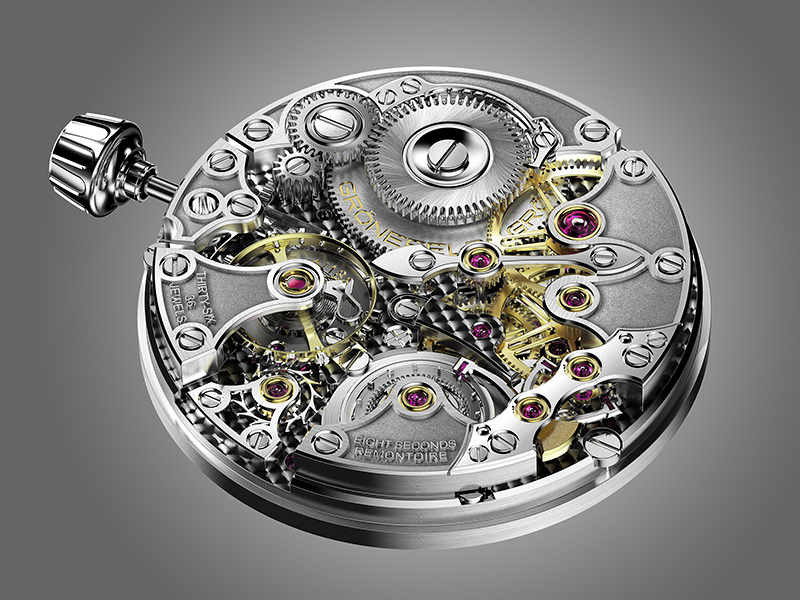 Bestowing a sense of calmness

The solid Sterling Silver dial features frosted and satin-grained surfaces, augmented with subtly polished edges. It employs three dial feet rather than the customary two, ensuring a very stable, solid union with the movement beneath.

The extended Lancette hour and minute hands are flame-blued steel and include hand polished centres. The hour circle sits higher than the central dial area, delightfully playing with depths to eye-catching affect.

Each hour is denoted with an applied index which is faceted and diamond cut. The tapering point of each index guides the eyes towards the central area of the dial, aiding interpretation of the highly lucid display of hours and minutes.

In the lower portion of the dial is a small seconds display, this again masterfully plays with depths to deliver a sumptuous aesthetic appearance. A grained circlet, marked with Arabic numerals, provides a fascinating contradistinction with the adjacent frosted surfaces.

Every change of dial depth is accentuated with a highly polished bevelled edge, engaging beautifully with ambient light.

The dial is signed with "Grönefeld', 'Eight Seconds Remontoire' and 'Handcrafted". Indeed, every component is finished by hand to the highest standard. 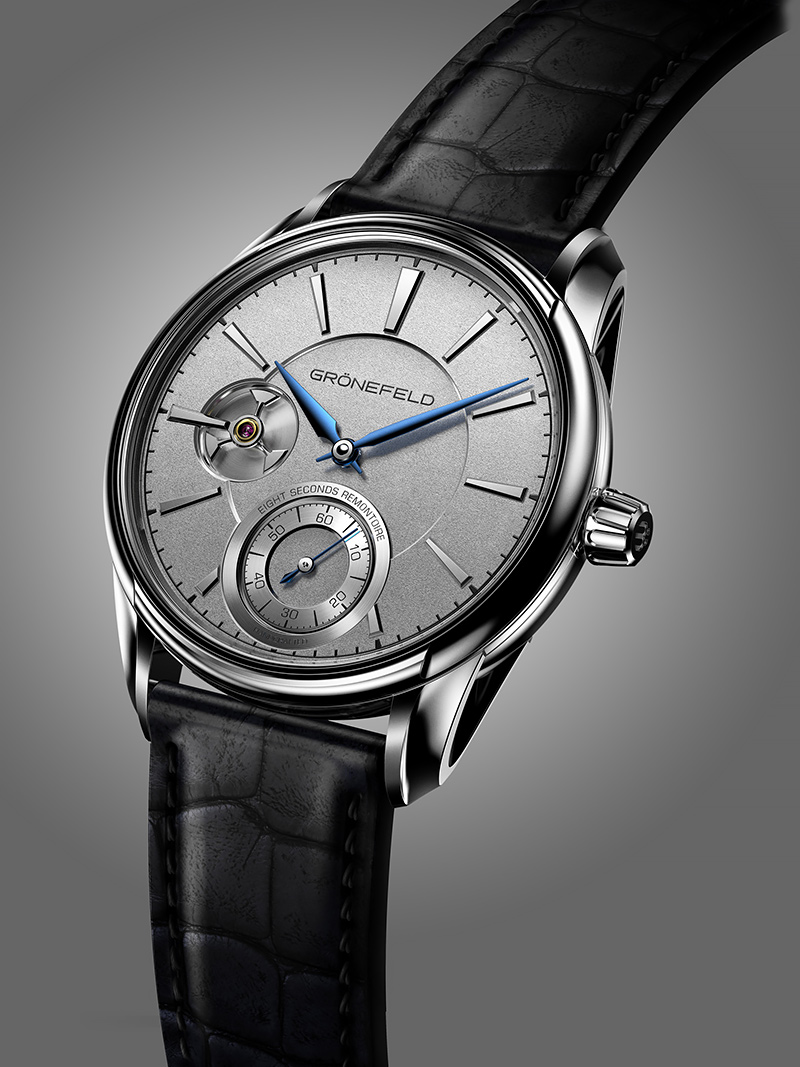 From the outset, Bart and Tim always envisaged the Grönefeld 1941 Remontoire as a watch intended to appeal to the most discerning of watch collectors. It was therefore imperative that the movement was befitting of such a timepiece, appealing to the exacting requirements of purists.

The stainless steel bridges replicate the facades of the Dutch houses, termed 'bell gables' and reference the homeland of the Horological Brothers, Bart and Tim. The bridges are hand-beveled, evincing a brilliant gleam, while the centres deliver a sublime contrast with their micro-blasted surfaces, adorned with relief engraving.

The new 5-arm, double spoke gear train wheels exhibit a contemporary character, but their circular grained surfaces pay due reverence to fine watchmaking tradition. The movement includes a balance wheel with white gold timing screws and is equipped with a free-sprung over-coil hairspring with triangular stud.

Gold chatons stand testament to the no-compromise specification of this movement whilst mirror polished screws feature chamfered rims and slots. Numerous surfaces glisten, courtesy of mirror-polishing which has been patiently executed by time-served hands. The inventory of different surface decorations will sate the desires of any purist and include snailed, grained, spotted and frosted surfaces.

With so much beauty harnessed within the Grönefeld 1941 Remontoire it only seemed appropriate to share the movement with wearers, equipping the timepiece with a sapphire caseback.

The time-consuming creation of each movement means that production will be limited to only 188 Remontoire movements, each with its own unique serial number, offered in a choice of case material and dial variants. 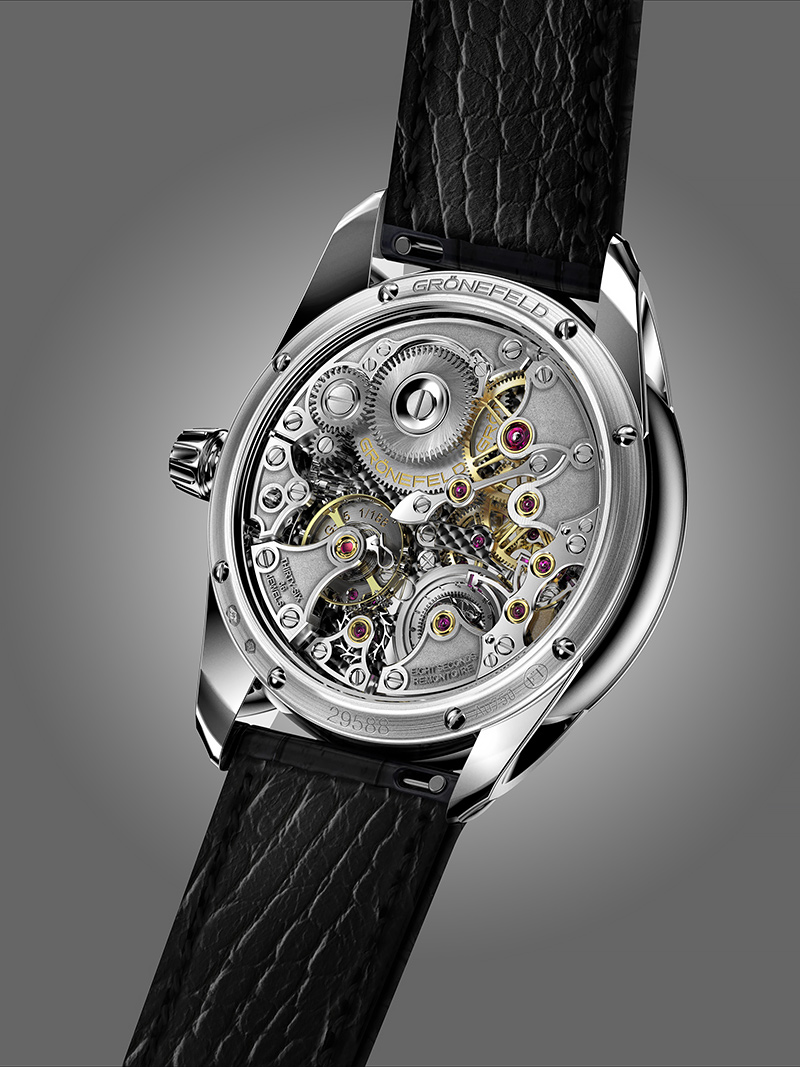